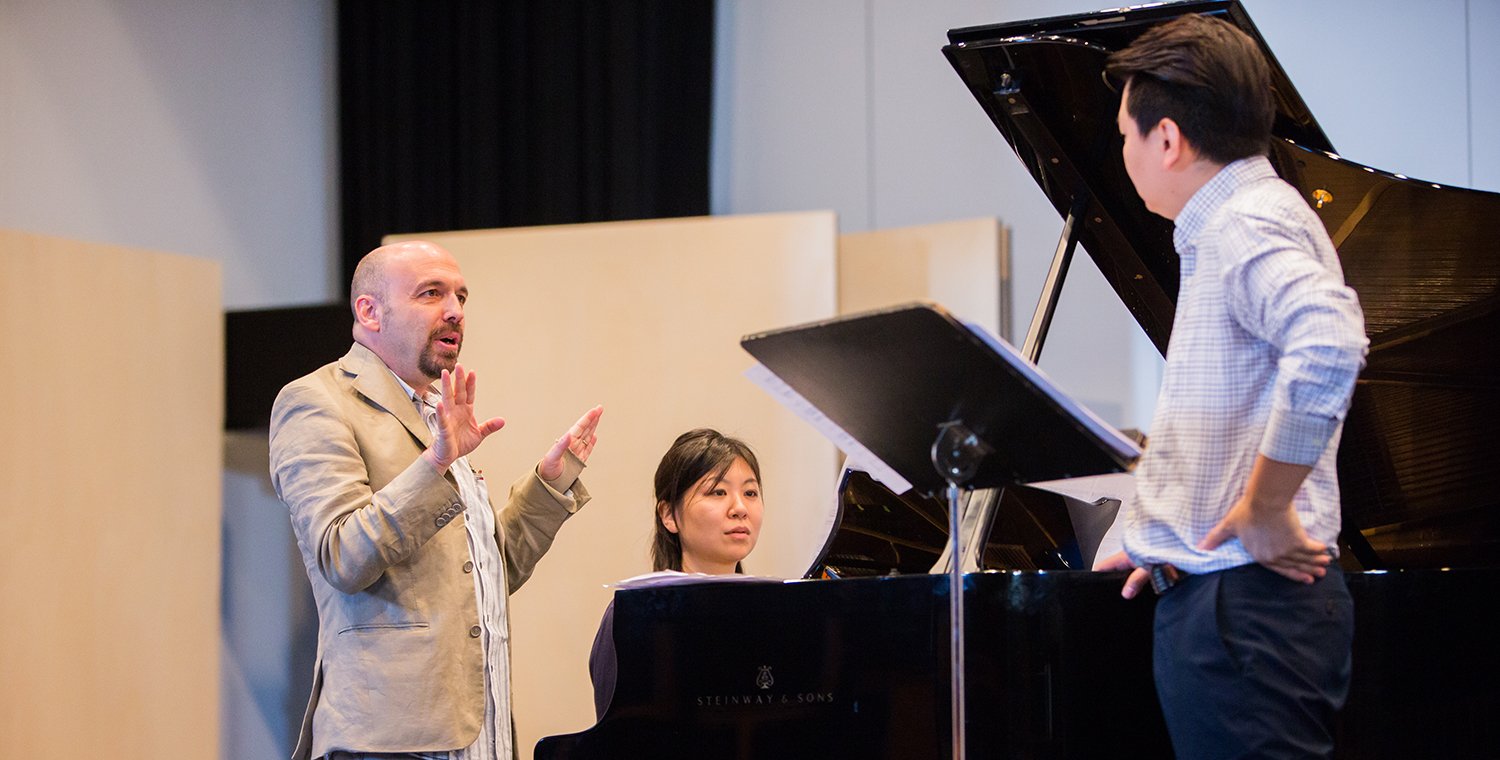 He has been the Italian accompanist of the great tenor Nicolai Gedda, performing with him Lieder and Melodies from the Russian and French repertoire. He has given recitals in the most prestigious European venues (Musikverein Vienna, Staatsoper of Hamburg, La Monnaie Theatre in Bruxelles, Paris Radio France, Hamburg Opera House, ecc.) as well as in the USA and Argentina. Erik Battaglia and Lucio Gallo have been the first Italian artists to perform a Liederabend at the Unter den Linden Theatre of Berlin in November 2001. In August 2003 he performed Hugo Wolf’s unfinished opera Manuel Venegas in Salzburg’s Wiener Saal. In 1999 he directed the Strauss Project, performing all the songs by Richard Strauss with the patronage of Dr. Christian Strauss, the composer’s heir. He has given many Italian first performances of songs and piano music by Aribert Reimann.

Erik Battaglia is also a composer (his Variazioni su un tema di Webern have been recently performed by the Turin String Quartet) and a musicologist: his volume Gioia e dolore diventano canto - 1000 Lieder su poesie di Goethe, with the foreword by Dietrich Fischer-Dieskau, has been published by the Accademia di Santa Cecilia in 2008. He published a volume on Hugo Wolf’s early songs, foreword by Claus-Christian Schuster (2011, I Lieder giovanili di Hugo Wolf), a monographic book on Strauss’s songs with a foreword by Michael Kennedy (2012, I Lieder di Richard Strauss), the Italian translation of 1111 German Lieder (2014, Il Libro dei Lieder. 1111 poesie tradotte off-line), and Piccola storia della cadenza d'inganno (2015). He translated Gerald Moore’s The unashamed accompanist and published many essays on the history and the performance praxis of the German Lied (cf., for instance, a contribution on Liszt’s songs in Franz Liszt: A Chorus of Voices, Pendragon Press 2011). He wrote the introductory notes of all his recordings on CD devoted to Italian art-songs (Songs by Tosti, Respighi, Verdi, Busoni [CD Ricordi, Fonit-Cetra, Warner]).

In 2006 Erik Battaglia founded the “Centro Studi Eric Sams” in order to promote the research on the German Lied and introduce students to the works of his mentor, the late English musicologist and Shakespeare scholar. He is translating and publishing the complete works of Eric Sams for the Analogon Press (eleven volumes already published and three on the way), as well as editing the online edition in original language. Erik Battaglia has been teaching at the Hugo Wolf Academy of Acquasparta and Torino since 1989 and holds regularly Master Classes on German Lieder and Italian songs. In 2012-2014-2015 he has joined the Berlin Liedforum and in 2013 the Vilnius Liedforum on Italy’s behalf. From 2013 he's Professor at the Deutsche Liedakademie in Trossingen. He is corresponding member of the Schubert Society of the USA (SSUSA), and joins the Honorary Advisory Board of the Lyrica Society for Word-Music Relations in Harvard.